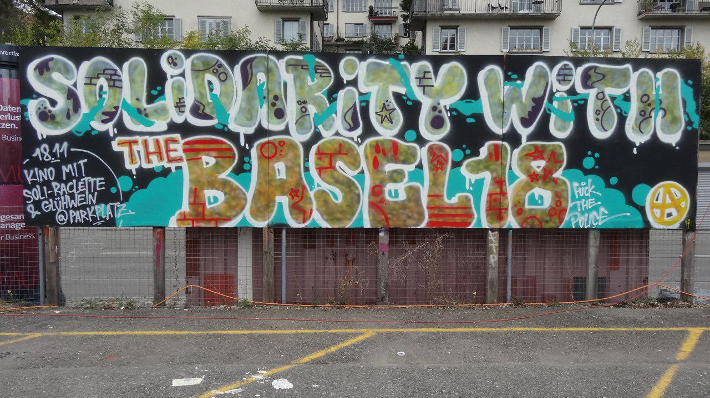 ‘In October 2018 the trial against 18 folks accused of taking part in a wild demo in June 2016 in Basel began. On the 24th of June 2016 a wild demo took place accompanied by attacks on the racist SVP (party), a UBS bank branch, some insurances and a criminal court in Basel. When cops arrived they were greeted with stones and bottles.

The defendants face due to the construct of complicity drastic penalties. As a result of pressure by the lawyers the sentence was delayed, but is to be expected on January 25th 2019.

More info about the trial on barrikade.info (German).

25.01.2019: Absurdly high sentences against Basel18:
The sentences against the Basel18 standing trial for a wil demo in Basel, range from 2 years probation to 27 months in prison. The case will go to the next instance. More info (in German) here.

We are moving!
We have moved our blog to blackblogs, the new domain is https://abcsuedwest.blackblogs.org/.
We will keep our noblogs domain as a backup!